Both devices feature custom hardware and software to augment the computer science learning experience by visualising the on-board sensor-generated data.


In the domain of computing education for children, much work has been done to devise creative and engaging methods of teaching about programming. However, there are many other fundamental aspects of computing that have so far received relatively less empirical attention. This work explores how the topics of number systems and data representation can be taught in a way that that piques curiosity and captures learners’ imaginations. Specifically, we present the design of two interactive physical computing artefacts, which we collectively call DataMoves, that enable 12-14 year old students to explore number systems and data through embodied movement and dance. Our evaluation of DataMoves, used in tandem with other pedagogical methods, demonstrates that the form of embodied, exploration-based learning adopted has much potential for deepening students’ data literacy, as well as for shaping positive perceptions of topics that are traditionally considered boring and dull.

The project was conceived during my summer internship at UCLIC (10 weeks). Right from the start, the idea was to create a tangible computing kit that would enable to teach computer science concepts to 12-14 year old students in the UK.

In the subsection below you can find early design sketches and the creative process that led to the creation of both devices. More information can always be found in the research paper we produced afterwards.

Early sketches for the Wearable 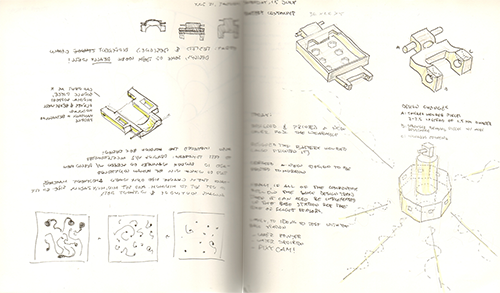 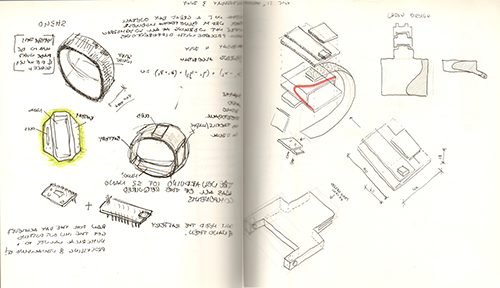 The wearable device was designed to have a 6 axis IMU embedded in it, enabling the wearer to explore a range of digital representations in front of a wall display. These provided real time feedback in the form of a dynamic visualisation that the user “painted” as a result of moving the limb it was worn on. The device was designed to be easily placed on the wrist and move through arm movements, making it easy for the wearer to create and explore the data visualisations. It was also designed to be rugged, to minimise the risk of potential harm to the wearers, e.g. scratches, induced by careless moves. The users can secure the device on their limbs using a Velcro strap that is connected to a partially 3D-printed wristband that houses the battery and the charger. The top cover is detachable and is secured in place by the two magnets on each side of the device. 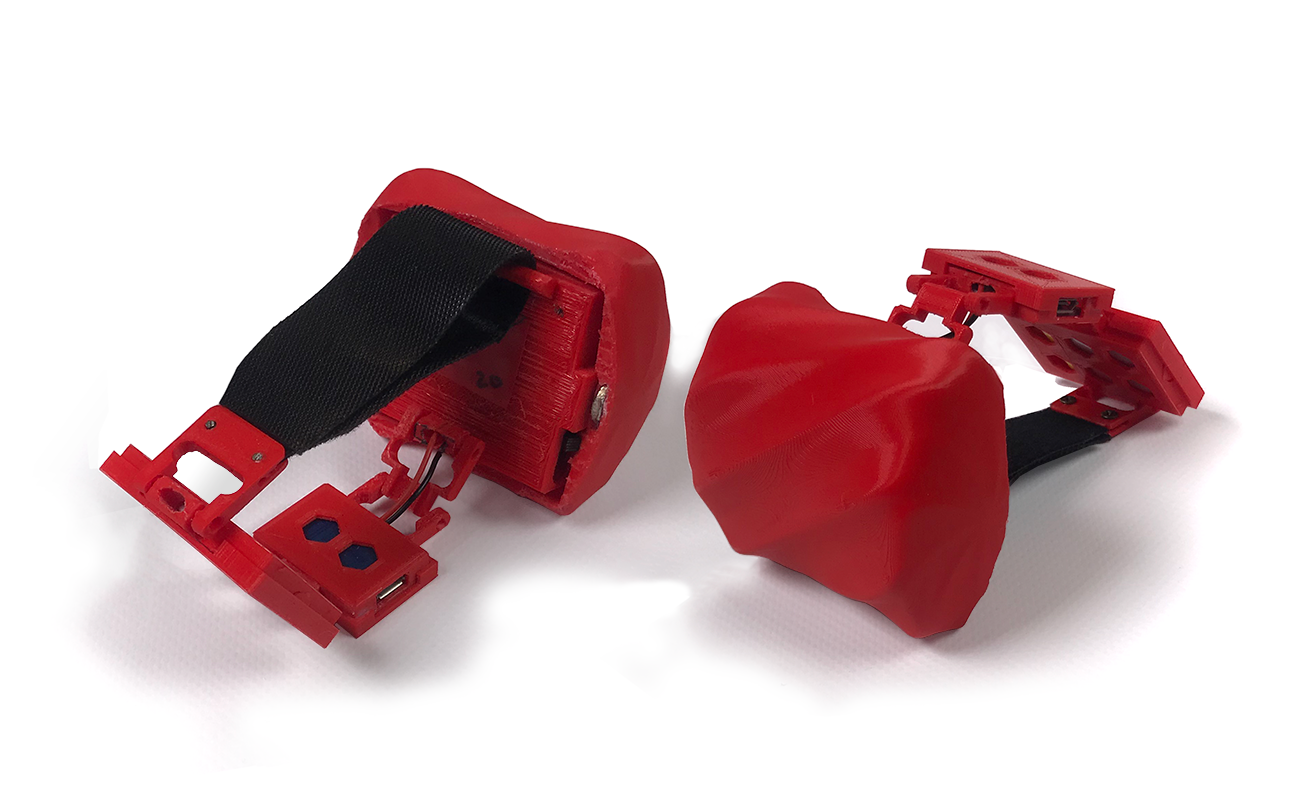 The design went through numerous iterations to achieve a smooth, safe and aesthetically pleasing look. Given that the device was going to be used by school children, it was of essential importance that no accidents would occur whilst actively using the device in motion, hence the "wavy" design was created to accomodate for that need.

Early sketches for the Base Station 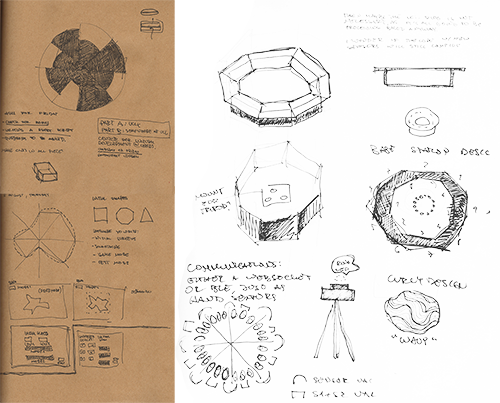 The base station was built using a regular octagon shaped device with a total of 8 distance sensors, one attached on every side. Each of the sensors provides a simple distance mapping to the line (or a shape) on a screen that represents the space around it. Users can interact with it by triggering the sensors and thus changing the output on screen. This enabled exploration of the ASCII number system which required multiple digits through the 8 sensors. It was also designed to focus on tracking lower body movements; where groups can change their body position to trigger the sensors which then visualise and map their location in space on a shared public display.

The design idea behind the base station was that the base station would be positioned in the middle of a space where up to 8 students could stand; one in front of each sensor close to a projected display that showed the sensors reacting to their actions in real-time. The shape of the device was designed to provide an affordance of how to use it: having eight sensors appearing, suggests one person standing in front of each. This was achieved through an octagon design with additional arrows placed on the top of the device to indicate where to stand when using the device. The octagon shape was partially determined by a hardware constraint, as the maximum number of sensors we could connect to a single Arduino was eight. Nevertheless, we found that eight sensors were enough to provide a sufficient spatial resolution to work with. Lastly, we chose a regular octagon as it intrinsically indicates 8 directions and subtly guides its users where to stand. To achieve long-range, lowlatency proximity sensing, Time-of-flight (VL53L1X) sensors were used, making the base station have a sensing radius of 4 meters in each of the 8 directions. To be able to connect 8 sensors to an Arduino Nano 33 IoT we used an I2C multiplexer, along with a HC-06 Bluetooth module. 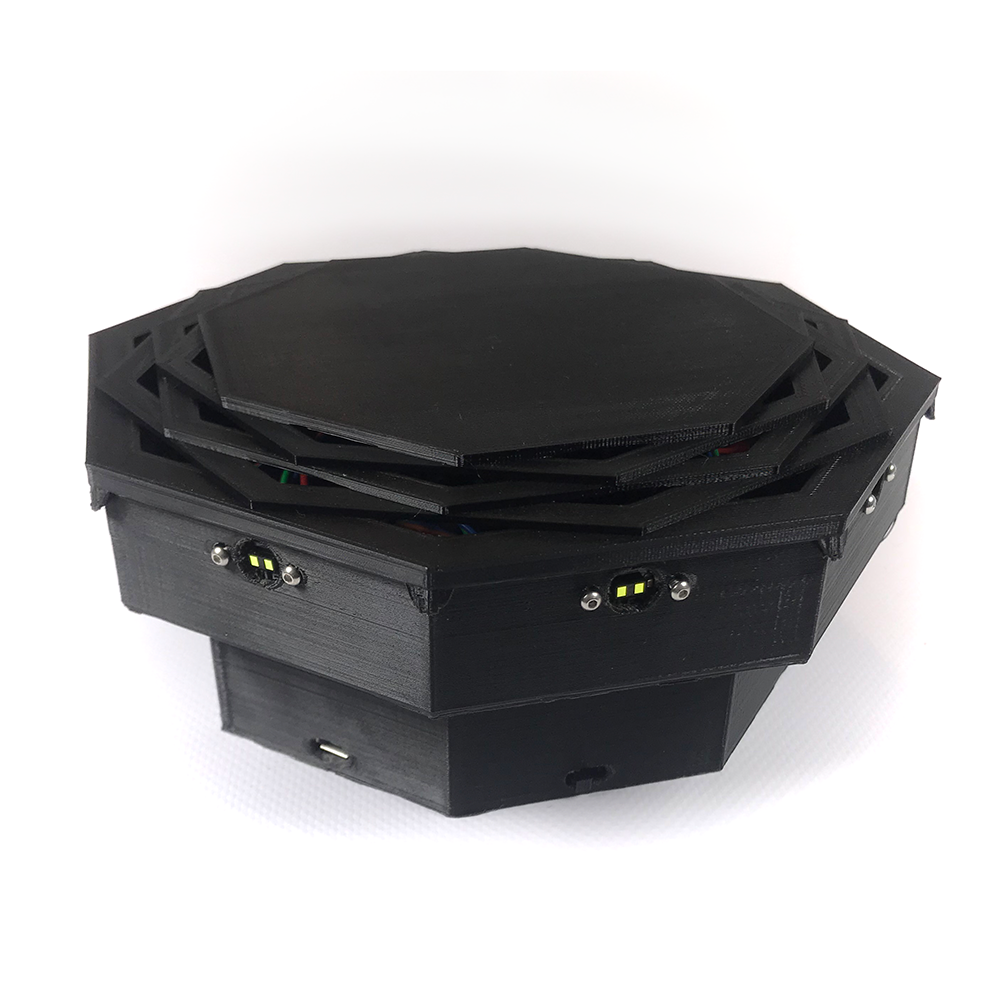 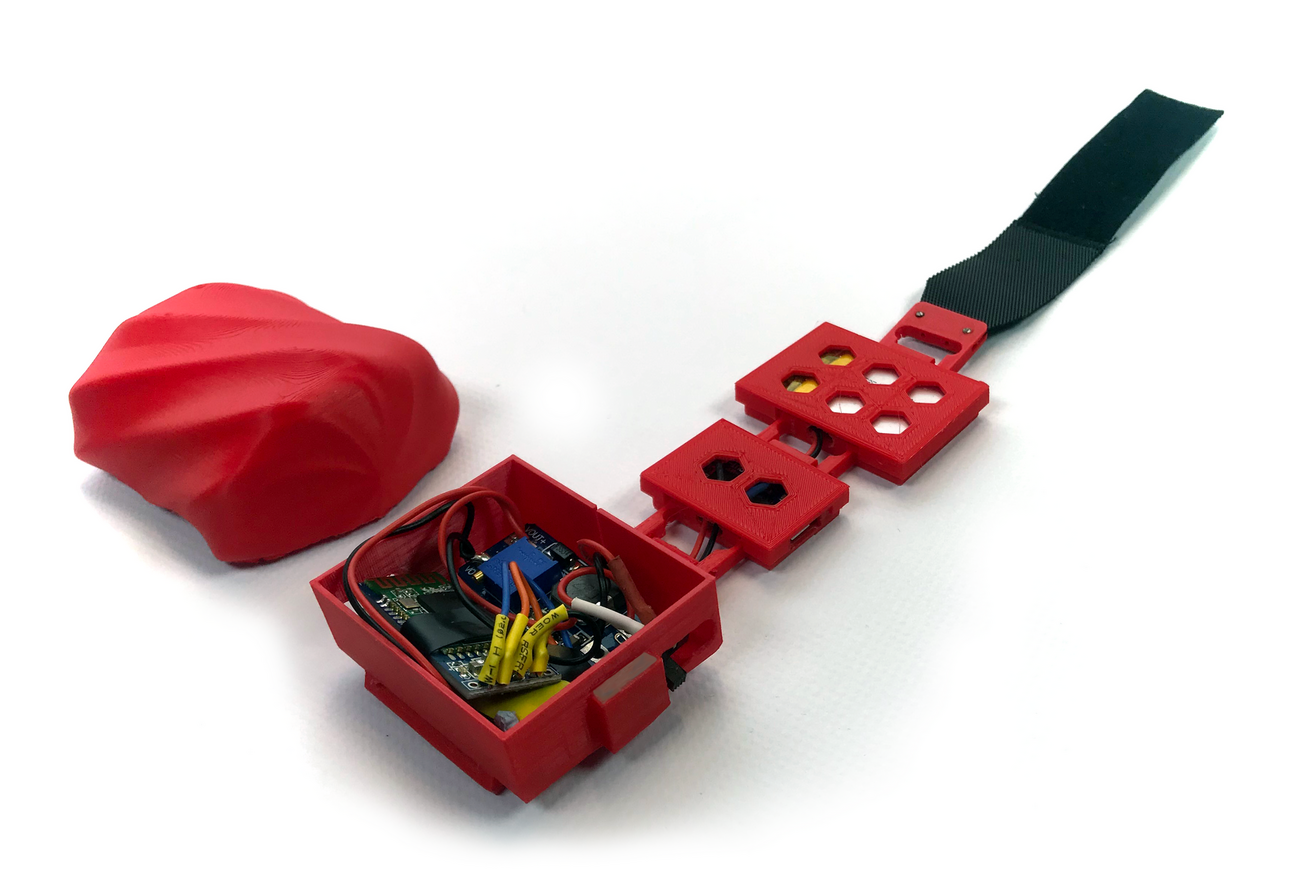 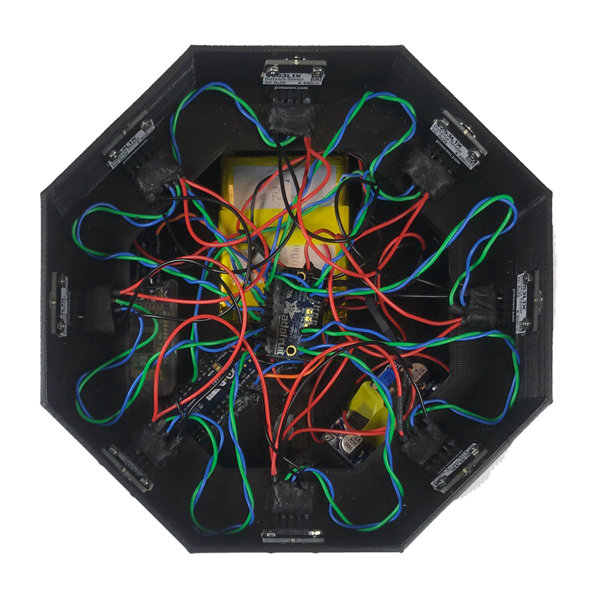 Both design feature easily detachable covers to both look inside and fix things if necessary. 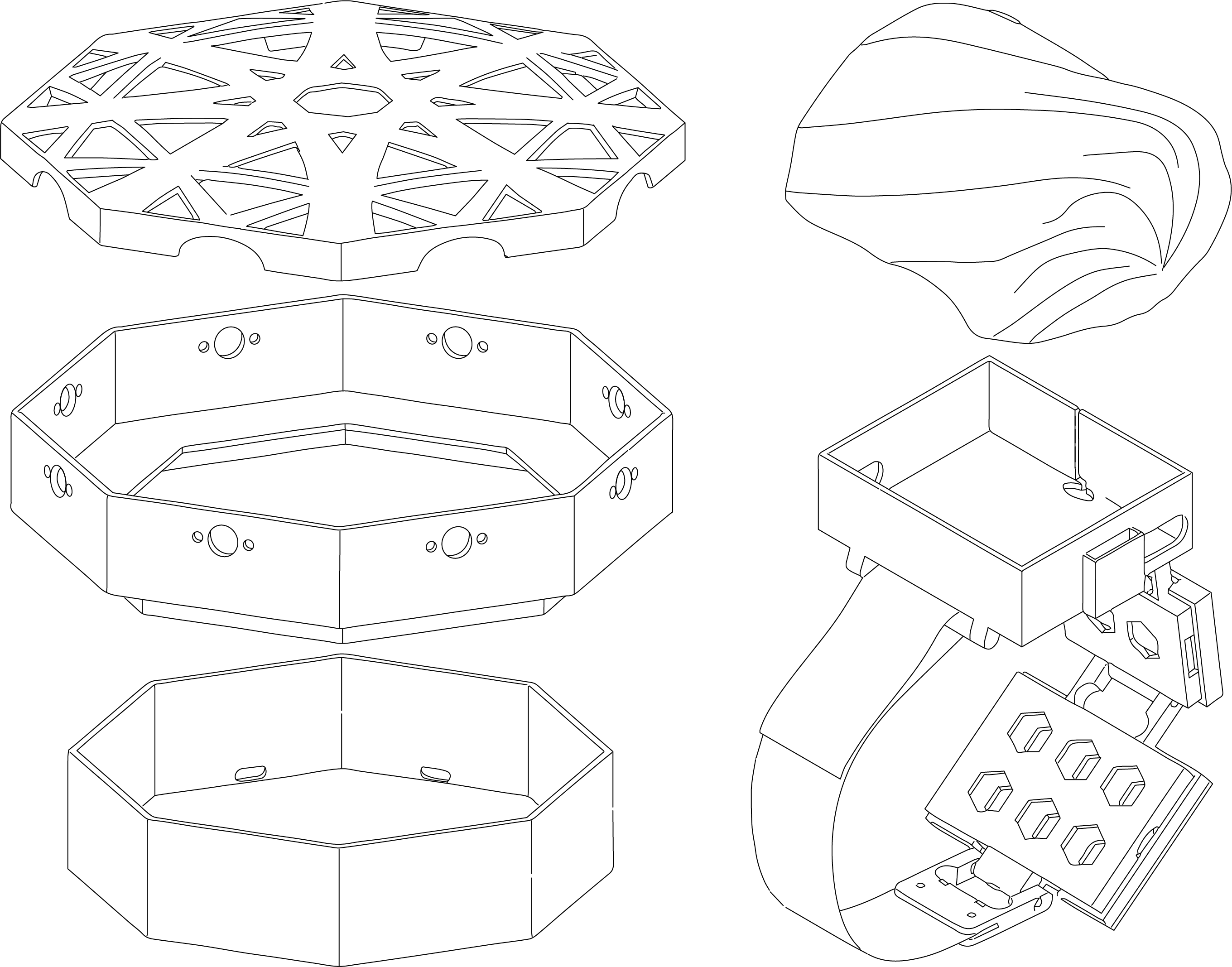 The bracelet design for the Wearable

The bracelet for the Wearable has important components located on it, like the battery and the charger, allowing for modular replacements and a more compact design overall.

The bracelet for is then connected to a Velcro strap to accomodate for users with different wrist sizes. The Velcro straps were sewed together for more reliable joint inbetween two pieces.