Stressed out Millennials and Wearable Devices: A Design Fiction Enquiry

This is my final year undergraduate thesis investigating wearable fitness trackers and their further effect on society as a whole.

The entire project is a result of 8 month long research at the Centre for Advanced Spatial Analysis (CASA).

The mass abundance of fitness trackers and the rise of ubiquitous computing has had profound implications on the everyday. Primarily, mass quantification practices and the spread of Quantified Self-culture of self-tracking have led to data becoming the backbone of the contemporary economy. Secondly, the widespread belief and trust in the objectivity of data have contributed to what in critical theory’s terms could be defined as the society of the Data Spectacle. Under the Data Spectacle, data is becoming the essence of the day-to-day existence, as in the West it is being collected to evaluate credit score and insurance rates, while in China it is the basis for the soon-to-be-implemented Social Credit System

In parallel, the increased tempo of life and hectic schedules in return have created a plethora of mental health challenges that are especially pronounced in offices and on university campuses. With the number of mental health conditions increasing considerably in the last decade, there have been attempts to tackle this problem, particularly with technology and data collection using wearable devices. 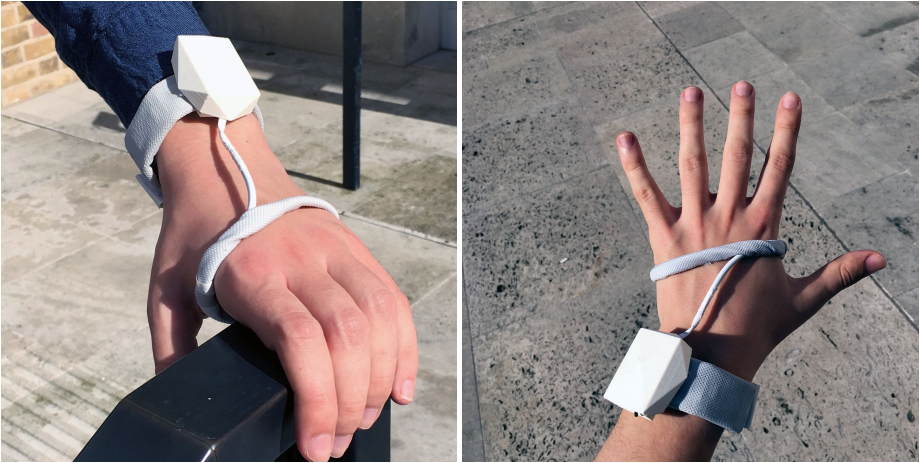 Therefore, this thesis investigates how biometric data and society’s obsession with tracking can be used to create an infrastructure that could help to tackle mental health problems, as well as what implications such infrastructure may have. To conduct the research, Design Fiction methodology has been used to combine philosophical abstraction and empirical testing via the means of device prototyping. In the paper, a thorough analysis is provided of a possible tracker design that could aid in solving stress and anxiety-induced problems on university campuses. Furthermore, considerable attention is given to the general infrastructure proposals of how such a system may function, including its benefits and drawbacks.

Finally, the prototyped device has been used to empirically test, evaluate and discuss the proposed biometric data tracking infrastructure to deal with mental health problems.

The thesis features a sample of creating writing as a part of the Design Fiction methodology. Below you can find an excerpt frameborder on the chapters that illustrates how Vapourworld inhabitants may feel about the prototyped device.

The following situation describes how the use of the device may affect exam sitting and how the use of biometric data can act as a useful measure to evaluate different courses in terms of difficulty and stress caused to students.

As the device was making schedule changes in anticipation of an exam, students were made to spend more time in the library revising. Additionally, going to the university gym was guaranteed to increase your daily SAS, when combined with prolonged study hours.

After entering the lecture hall I saw how frantic everyone looked, I probably didn’t look much better either as my palms were dripping wet. I can't do anything about it, the worst thing is that it gets more severe when I think about it. I can’t stop panicking.

Someone recommended me those meditation apps. Morons. This is just a waste of time. I tried exercising and it didn't help, besides, I don't have any time for this anyway.

I knew I should have studied something else, I just can’t understand this. If I get another 2:2 this year I will never get a proper job. So what the stupid thing on my wrist keeps telling me I studied enough in the library.

Oh god, I’m going to have a breakdown again, this place sucks, I hate this device and those stupid SAS scores. 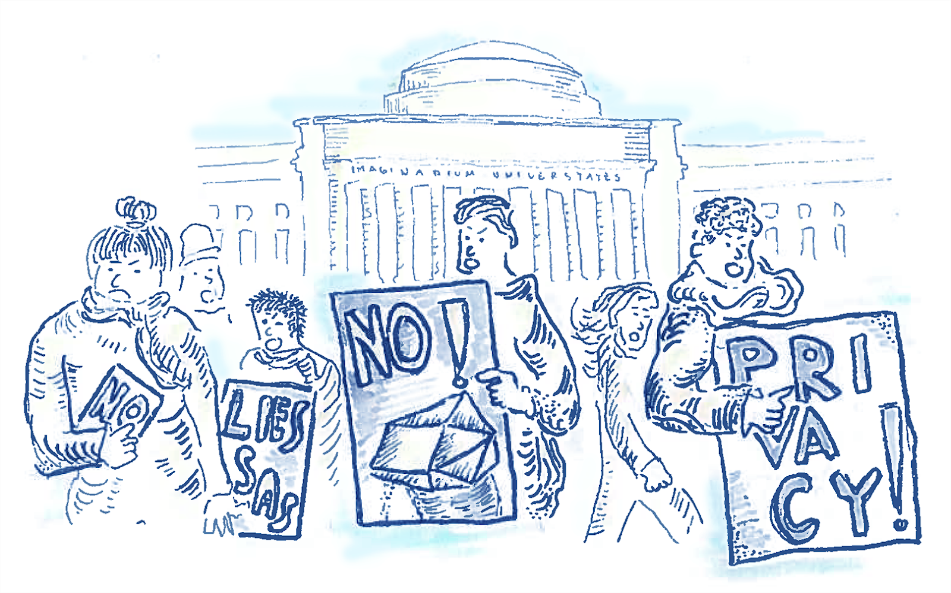 Throughout the duration of the test, the students' palms were sweating, and the increased heart rate was further exacerbated by the fact, that their biodata would attract departmental attention. Overall, the awareness of the data being collected caused a positive feedback loop, that in return elevated anxiety levels.

After the test was finished, the students received notifications about a recommended work out, to alleviate the stress and further information that recommended studying hours were reduced for the day, due to having a test already taken place.

Students A and B received an additional message:

Due to recent changes in your SAS, a Personal Tutor meeting is organised in two days.

The predictive prevention system would select students for such interventions based on a combination of factors including their academic performance and the Student Activity Score. Such meetings would be a common practice to aid students whose biometric readings indicate susceptibility to mental health risks. Additionally, similar interventions would be conducted when inspecting if students have made progress regarding their anxiety levels. Quite evidently, this would be shrouded in confidentiality. 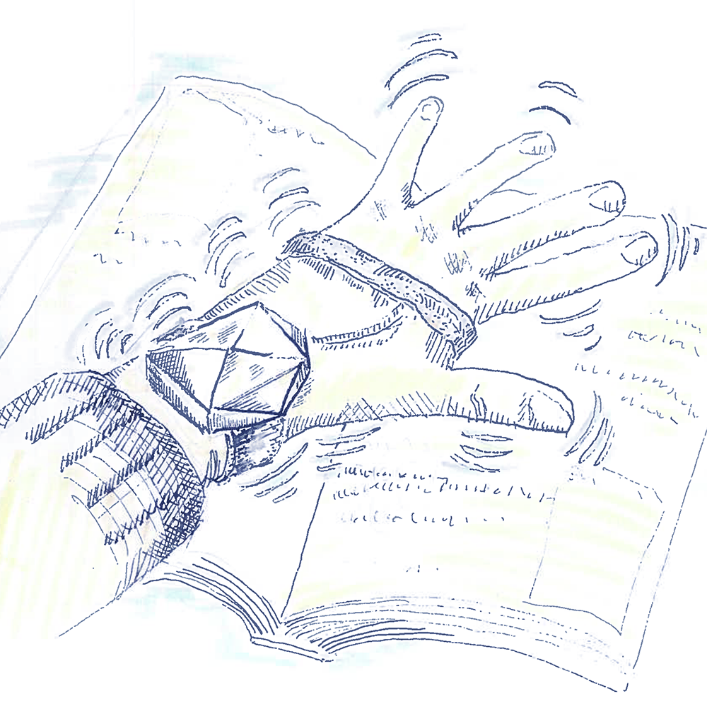 The master system is aware if stress levels are elevated because an exam is taking place and is thus able to readjust SAS calculation accordingly. Biometric records, including the data from ordinary lectures, are then stored in the database to later evaluate the module in terms of difficulty and the stress being caused to students. In return, this not only provides feedback for the lecturer but also informs the department if the lecturer is being fair to their students. 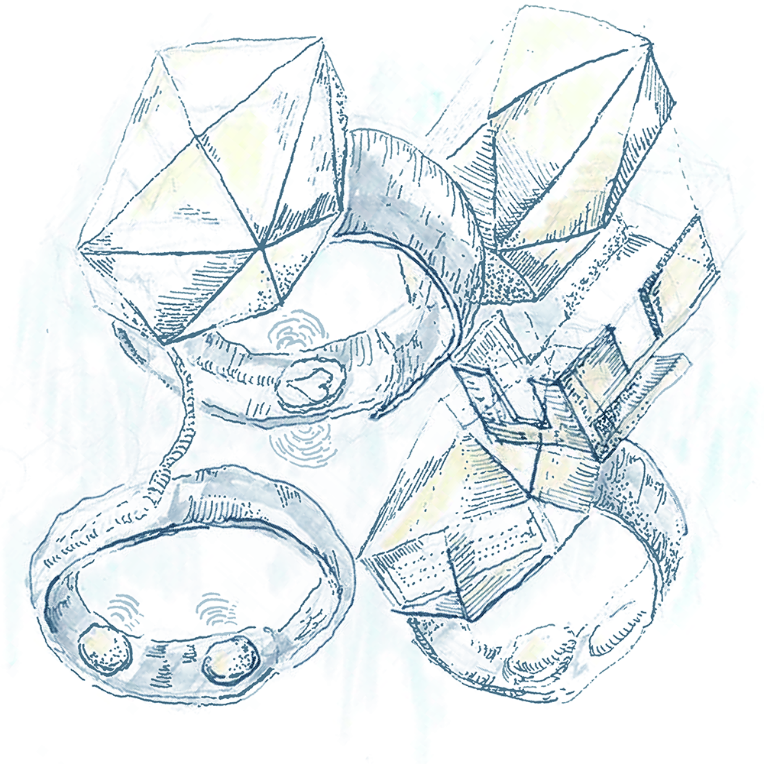 We are working on a campaign to popularise the device, so that that the students would not focus on data collection so much…

Yet, the predictive prevention system has started to behave in ways we do not understand. It selects students that may be in early need of support, but the criteria … it’s… definitely not biometric data based.

It has become a black box, completely dependent on latent variables and now we have no choice but to blindly follow its instructions.

After the first few years of the system being implemented, there would enough data to start classifying students based on their biodata and average daily SAS. Ultimately, such a measuring system would be more precise long term than traditional summative assessments as they would be based on continuous data readings and not one-off test results.

This paper had examined the broader context of datafication practices, the deteriorating state of mental health at universities and one of the potential remedies for it being anxiety sensing devices.

With the help of physical prototyping it was concluded that while the implementation of such devices at universities was definitely feasible, a litany of ethical and implementation challenges may arise. Primarily, it was unclear who the real owners of the data were, and to what extent the generated data could be used both to increase student wellbeing and fuel further scientific research. Secondly, it was argued that universities may not need to implement such large scale infrastructure projects, given that they already have substantial data on their student population. Therefore, further research may benefit from fully understanding how the existing data can help students cope with mental health stigmas short-term, and what technological and infrastructural solutions exist to eradicate it in the long-term.

Lastly, being a unique methodological approach, Design Fiction has enabled to relate the philosophical nature of Debord’s Spectacle as well as speculative design’s visions to the real world via carpentry. In return, the research managed to provide a critical overview of what the current technological trends are, and how datafication practices are likely to evolve in the near-future. Nevertheless, further research using Design Fiction may need more enquiry into the methodological approaches, as there is some potential for it to become fear-mongering, thus ultimately limiting the discourse which it is trying to create.

Overall, as the society of the Spectacle continues to increase its reliance on data, it will be important to ensure that when data is gathered from people, it will result in mutually beneficial outcomes.