We have deployed 36 environmental sensors in a highly occupied lecture theatre to collect data on CO2 and temperature distributions indoors. The sensor data was collected over the span of several months and was visualised using a set of novel data visualisation tools.

It was found that by showing the building occupants the visualisation tools to inspect the data we could potentially affect their sitting positions in the lecture theatre.

The full report can be accessed here.

Below you see three types of data visualisation (A,B, and C) - all are comprised of three components:

The described project builds on the pre-existing sensor deployment in the William Gates Building (also known as the Computer Laboratory) in Cambridge, UK. The building has become a testbed for large-scale sensor deployment since April 2020, with a proprietary BIM, sensor data-streaming and visualisation platform. The following subsection describes the smart building deployment in the WGB in more detail, including the description of the installed infrastructure that allows for sensors to be deployed.

The basis for this project was the installation of 36 new environmental sensors in LT1 in the WGB. Before the sensors could be deployed, sufficient ground work had to be carried out to ensure that the space was suitable for the project. There were two large lecture theatres in the William Gates Building - LT1, comprising 264 fixed seats, and LT2, comprising 138 fixed seats. Both lecture theatres had seating arranged on a slope. Lecture Theatre 1 (pictured below) was selected to be more suitable due to its size and more common use that would allow for more data to be collected. 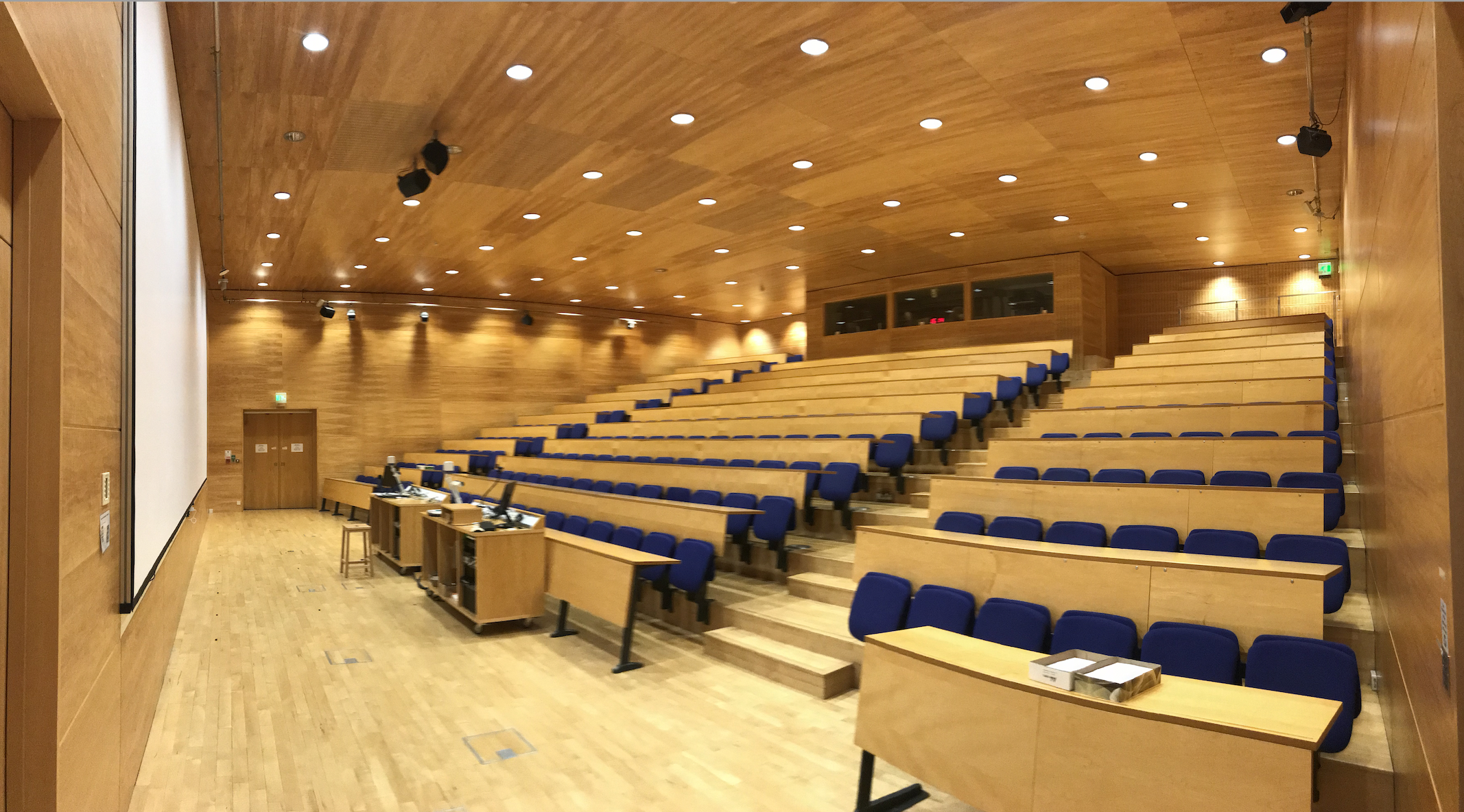 For the analysis, we were mostly focusing on temperature and CO2 metrics, since those were the most affected by human presence. 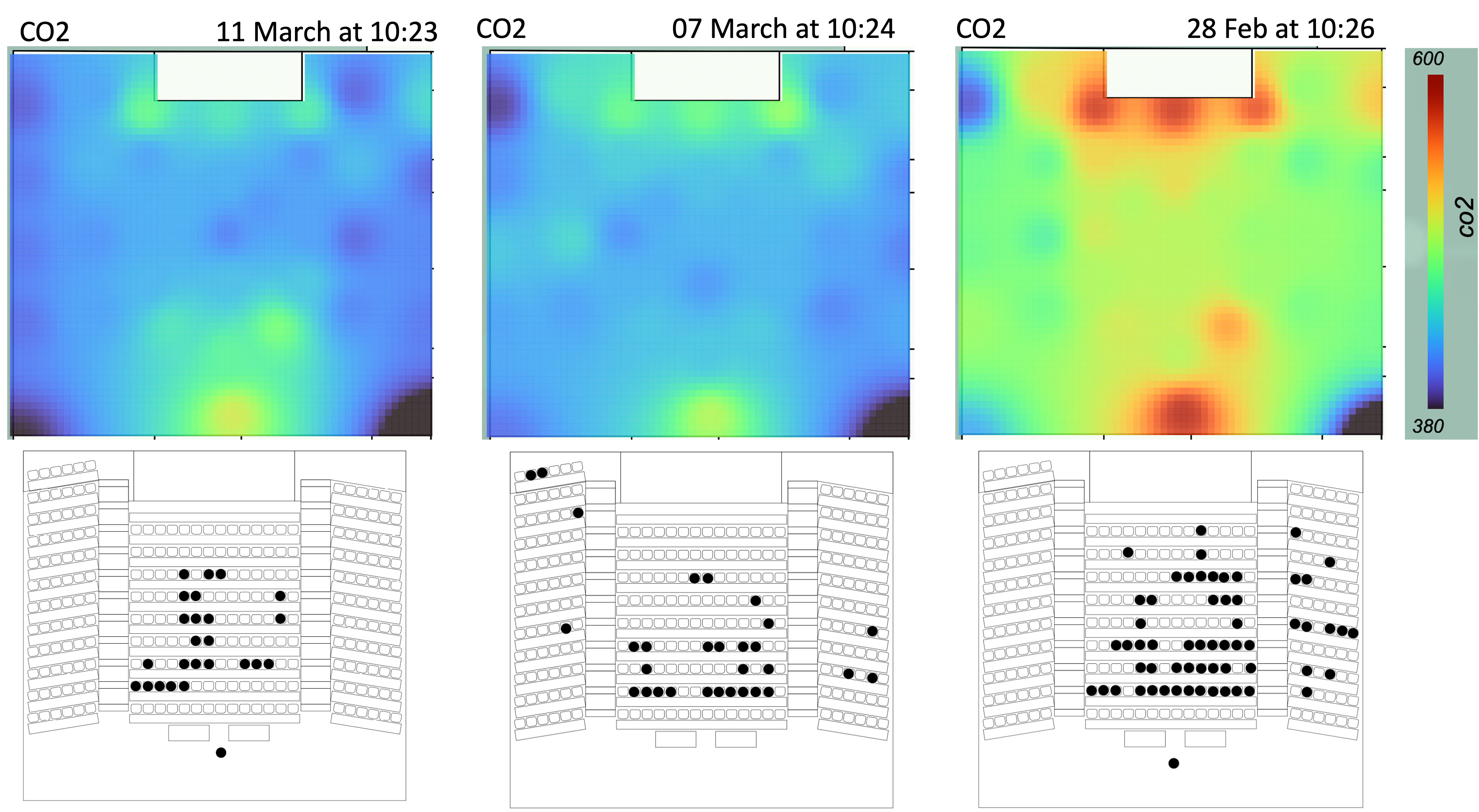 After analysing the heatmap data it was found that CO2 generally tended to increase at the front of the lecture theatre where the lecturer was presenting as well as in the back of the lecture theatre where the sensors were not too far from the ceiling. Furthermore, it was found that CO2 levels tended to rise very rapidly from the beginning of lecture, reaching its apex at around 15 minutes into the lecture and then staying there during the course of the lecture. While opening the doors was found to temporarily decrease CO2 levels, as soon as the doors were shut CO2 levels jumped up again rapidly within minutes. The distribution of CO2 at the front of the lecture theatre can be explained by most of the students’ preference to sit at the front (shown in Figure 25), as well as the fact that lecturers presenting the lectures did not wear masks that would dissipate the CO2 in space. The high concentration of CO2 at the back was surprising since CO2 is heavier than air and should not go up, especially given the steep slope in LT1 (Figure 1). However, since exhaled air from the human body is a mixture of gases that are warmer than the surrounding air, it generally tends to go up. The sensors located at the back of the theatre were also the highest-placed sensors due to the LT1’s shape, hence the observed effect of CO2 being highest at the back.

Finally, when compared with the student distributions, CO2 had a smaller correlation with the seating positions than temperature, even when taking into account possible sensor miscalibration and subtracting their readings at midnight to form a better baseline. Overall the results for CO2 and temperature analysis show some correlation between the sitting location and the observed changes in environmental phenomena, however, more data has to collectd for definitive conclusions. 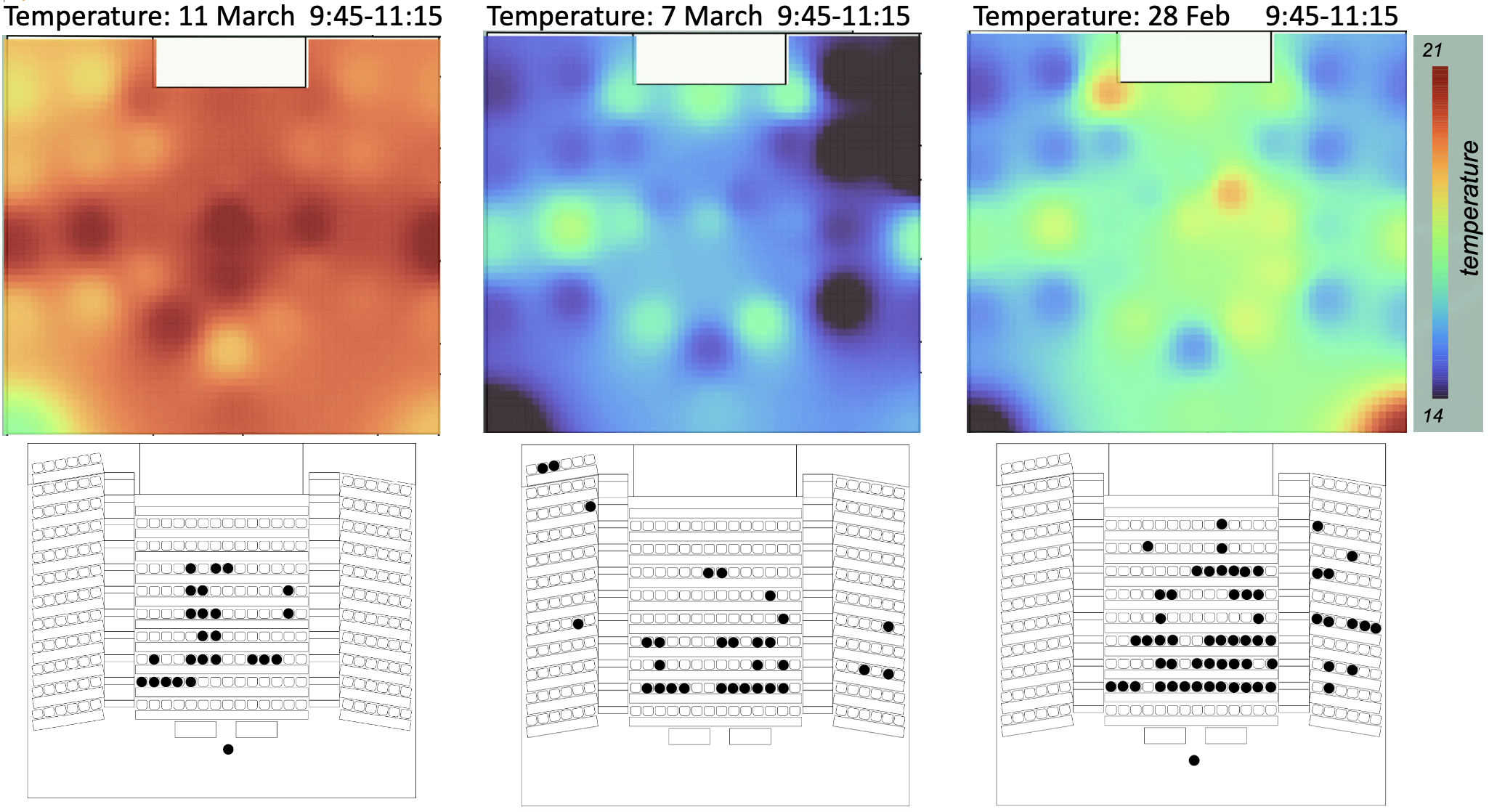 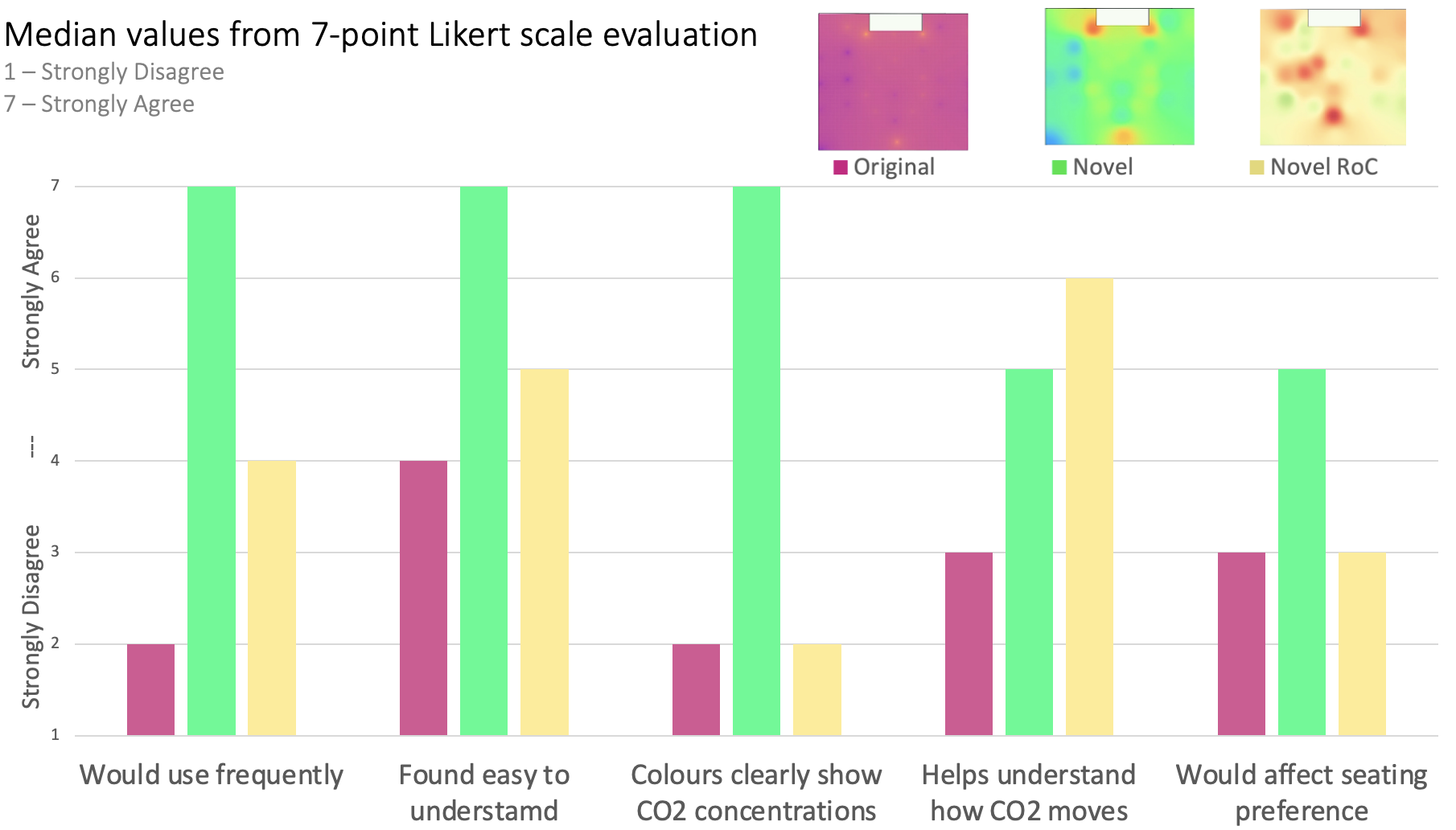 Overall the results (n=9) indicate that there is a clear preference for the new visualisations (Figure above). Furthermore, all participants stated that they would like to use such a data visualisation frequently, and that it would impact their sitting preference in the lecture theatre. This directly ties in with the main research question showing how the collected data can be used to affect the building occupants. Therefore, it gives an indication that data visualisations like this can amplify the existing sensor deployment in the building to create deeper, more meaningful interactions that affect how building users interact with the building.